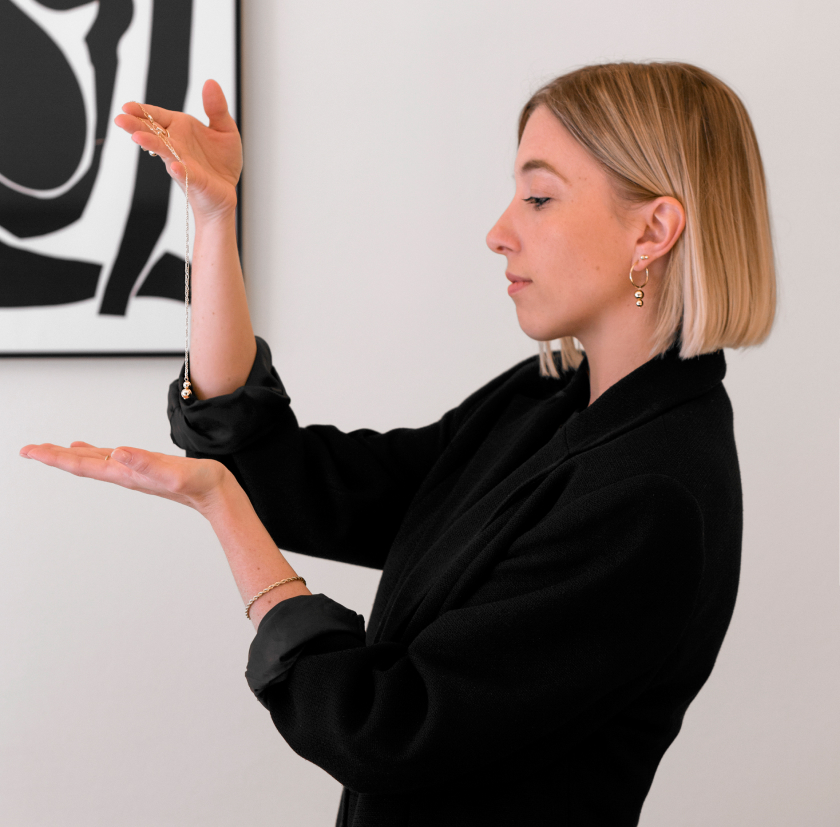 Hello!
Come into our atelier and get to know more about us.

“Klimbim is timeless, simple and understated, designed to enhance a woman’s natural beauty and femininity. We create pieces that you can easily combine with any outfit and wear on any occasion.”

Hello!
Come into our atelier and get to know more about us.

“Klimbim is timeless, simple and understated, designed to enhance a woman’s natural beauty and femininity. We create pieces that you can easily combine with any outfit and wear on any occasion.” 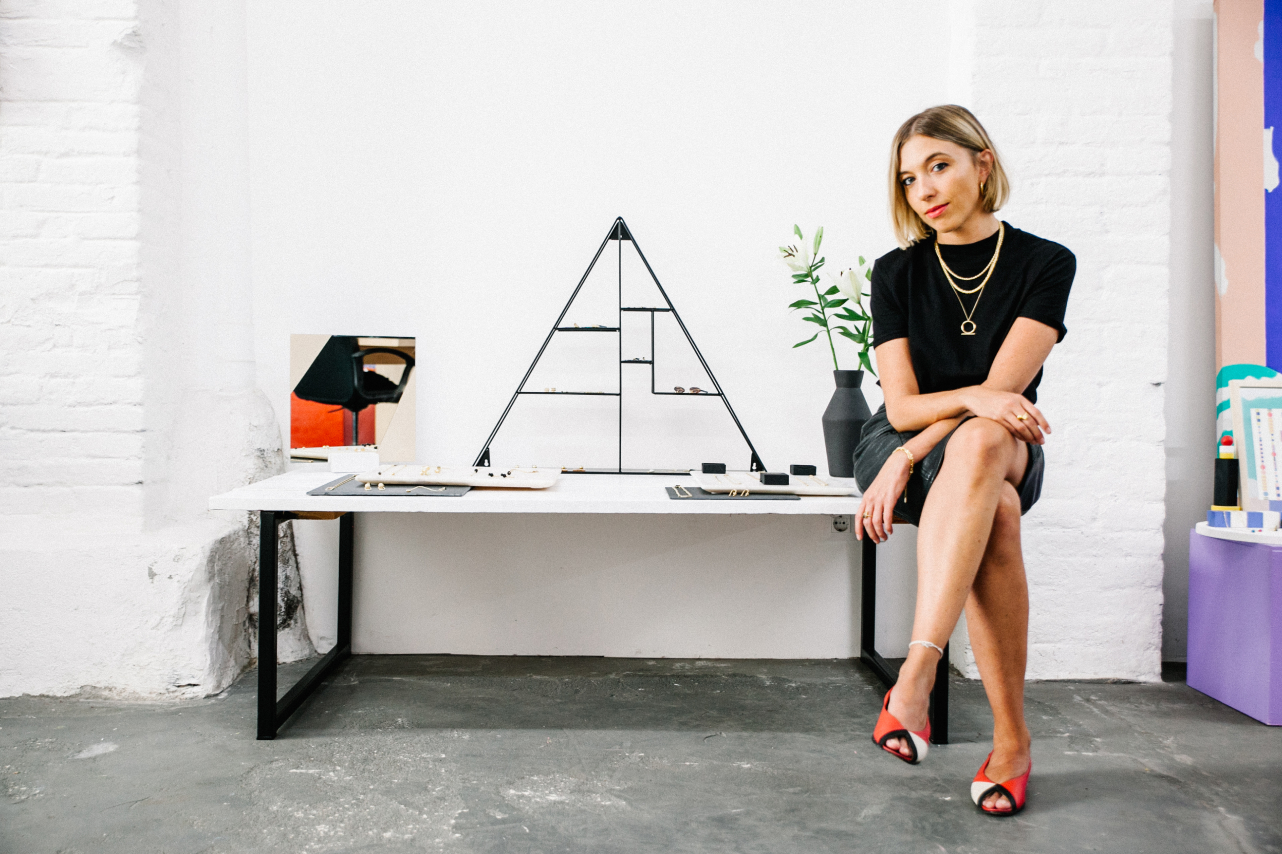 KLIMBIM was established around 2014. Johanna, the founder, came to Barcelona to spent one semester in the mediterranian city and didn’t return to her homeland, the north of Germany. This is precisely where she finds her inspiration, in the north european influences of her childhood and youth and the daily flair of the feudal and mediterranean streets of Barcelona. 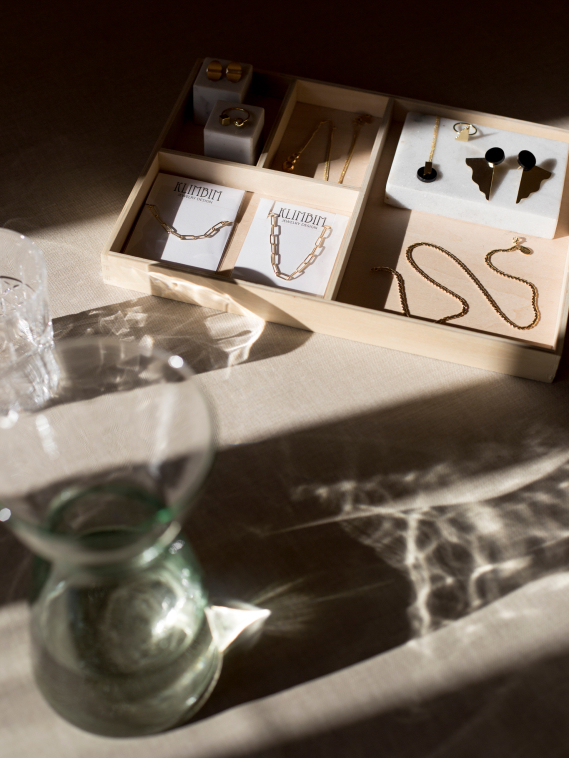 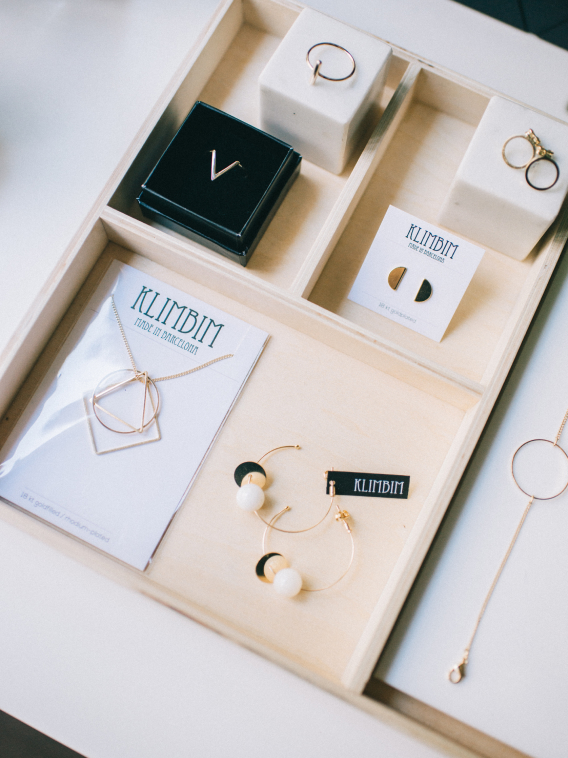 Klimbim are jewelry creations, which are caracterized by opposing influences. On the one hand the Art Déco movement and romantic catalan Art Nouveau, and on the other hand clean and understated lines and forms inspired in architectonical movements. 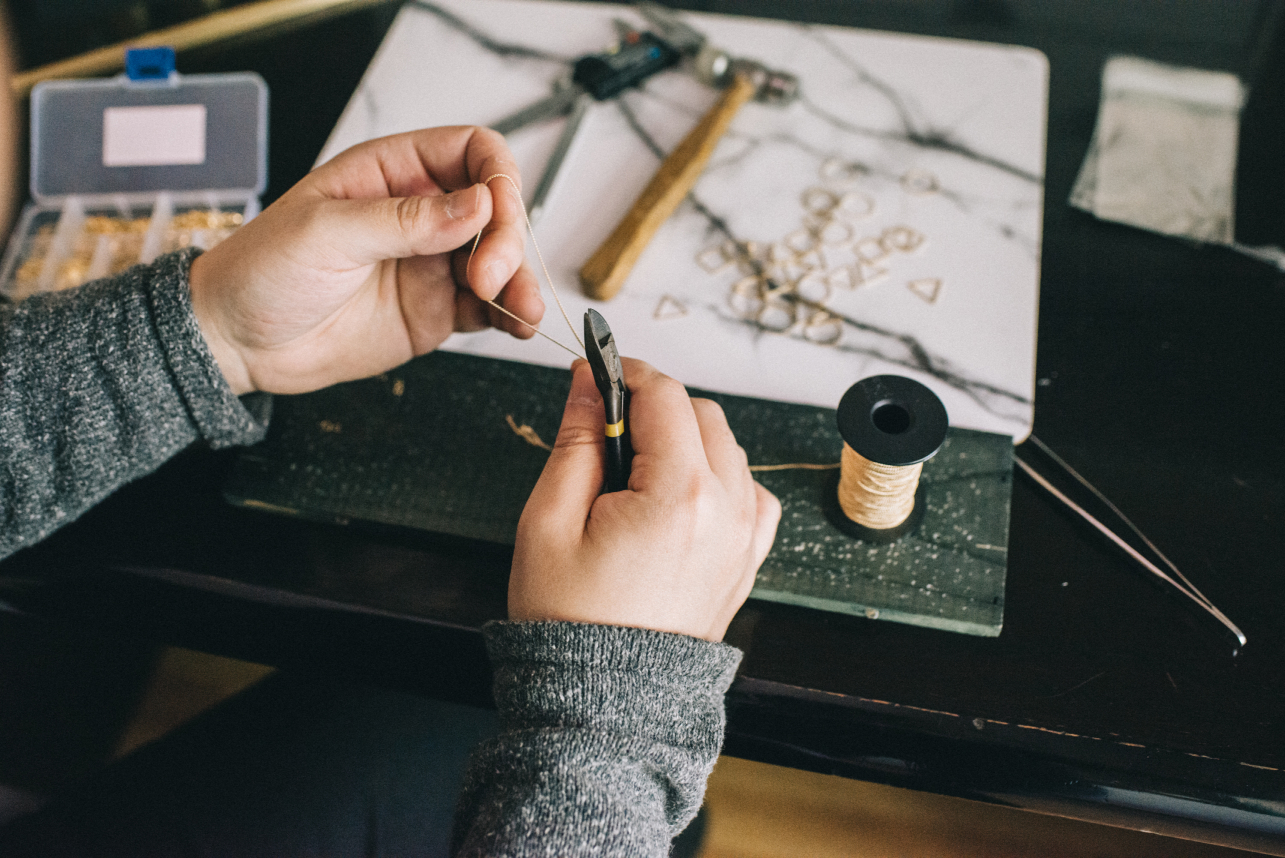 Every Klimbim jewel is created piece by piece in our studio in the heart of Barcelona. It is very important to us to work mainly with local manufacturers and craftsmen. 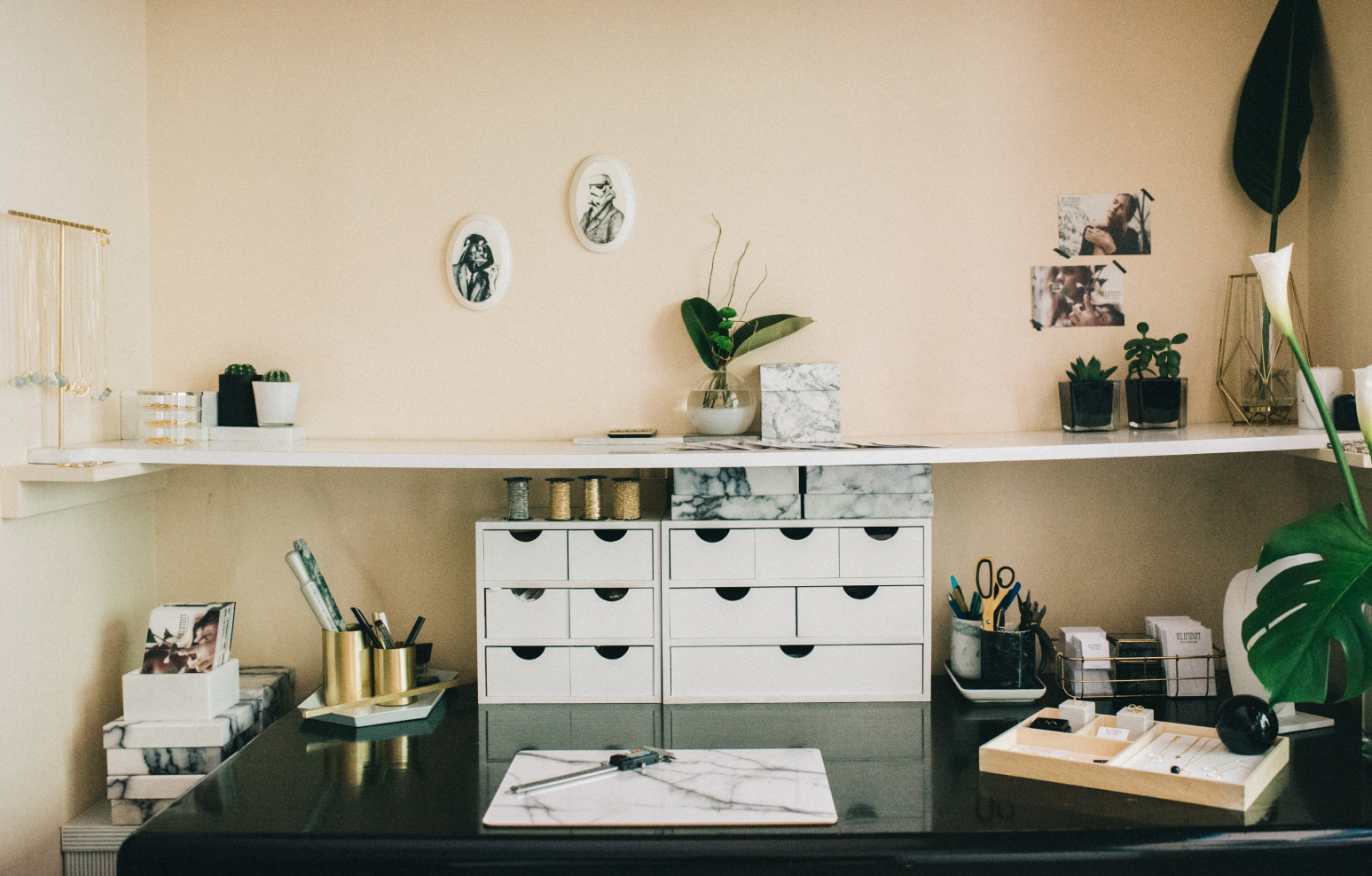 Klimbim (odds and ends, in German) is the name of Johanna Gross and Edgar Espin Lecina’s project and Barcelona is its surname, a natural addition after her founder Johanna came to the capital of Catalonia to finish her university studies and where she would fall in love with the language and her current business and life partner Edgar.

Johanna was born in a small city called Walsrode in Germany, where studying anything related to design was considered a future of economic uncertainty, so she devoted her studies to Hispanic Philology as her dream was to speak Spanish like a native since she was a child, thanks to various trips to the Dominican Republic where relatives of her live.
Here studies required one semester in a Spanish speaking place, that’s why Johanna ended up in Barcelona. Here she meets the world of design and starts working in a fashion boutique in the neighborhood of Gràcia. Thanks to this and a few contacts with designers, she’s motivated to design jewelry pieces that were economically accessible for both her and her clients. Hairpins made up of vintage bottons were the first pieces to carry the label of Klimbim Barcelona in 2010.

At the beginnings Klimbim was a kind of a one-woman show, as the label was growing step by step in 2016 her boyfriend Edgar incorporated and became part of the brand. Since then, Johanna and Edgar are working together hand in hand to fulfill orders, create campaigns and in the designing process. Klimbim stands for creation by inspiration. Ideas can come to us at any time, it could be while watching a movie, in an art exhibition or in architecture. There are days when we sit with a notebook and pencil to design, and others in which we play with the materials to see what we can achieve.

In terms of production Klimbim stands for ethical values, all pieces are made one by one in a sustainable way and with local suppliers trying to offer competitive prices.

As an honest brand and we don’t lie to our customers. Our clients are aware that our pieces aren’t solid gold, or silver, and that metals can wear out over time compared to pieces by luxury brands, but that same customer knows she or he doesn’t need to spend a three-digit figure for a piece that she may only wish to wear for one or two years.

Now, Klimbim is a sustainable & minimalist brand sold in fashion shops in Barcelona, Germany, the Netherlands, Austria and Belgium, as well as online.

This website uses cookies to improve your experience while you navigate through the website. Out of these, the cookies that are categorized as necessary are stored on your browser as they are essential for the working of basic functionalities of the website. We also use third-party cookies that help us analyze and understand how you use this website. These cookies will be stored in your browser only with your consent. You also have the option to opt-out of these cookies. But opting out of some of these cookies may affect your browsing experience.
Necessary Always Enabled
Necessary cookies are absolutely essential for the website to function properly. These cookies ensure basic functionalities and security features of the website, anonymously.
Functional
Functional cookies help to perform certain functionalities like sharing the content of the website on social media platforms, collect feedbacks, and other third-party features.
Performance
Performance cookies are used to understand and analyze the key performance indexes of the website which helps in delivering a better user experience for the visitors.
Analytics
Analytical cookies are used to understand how visitors interact with the website. These cookies help provide information on metrics the number of visitors, bounce rate, traffic source, etc.
Advertisement
Advertisement cookies are used to provide visitors with relevant ads and marketing campaigns. These cookies track visitors across websites and collect information to provide customized ads.
Others
Other uncategorized cookies are those that are being analyzed and have not been classified into a category as yet.
SAVE & ACCEPT
Your Cart